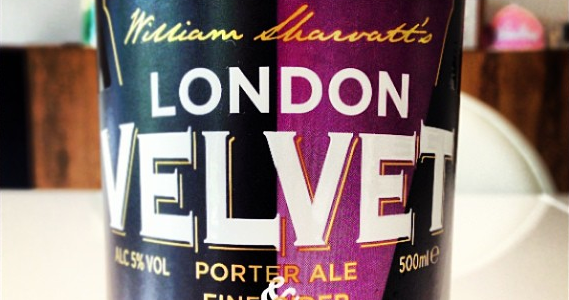 Beer and Cider Blended? London Velvet has a go

A few weeks back when I started Bru Haroo! and posted my first blog I sort of had a feeling that someone would try and create a beer/cider blended brew

I have an “appreciation and love of artisan and craft brews – be it a beer or cider or perhaps something in between – and I wouldn’t rule it out these days with some of the interesting brews being created!”
Paul Butler, Bru Haroo! Founder

Not long after I received an email from David Green who is now releasing such a beer/cider blend:

The Porter Ale is brewed in open fermenters with a top fermenting yeast and the cider is made from traditional UK varieties. There are absolutely no other ingredients.

The cider is made in Ledbury Herefordshire and the Porter is brewed in Warrington by Thomas Hardy. It was very difficult to source both the cider (because I wanted traditional UK apple varieties to be used and I didn’t want any sulphites in the cider) and the Porter (because I wanted a complex malt mix and open fermenters with a top fermenting yeast) to try and get as close as possible to the real traditions of the two parent drinks. As a bit of a one man band with some good friends in the brewing trade helping me, we finally got to the position where I was happy with the product and the production partners”

Thomas Hardy Brewing and Packaging, Burtonwood – where the porter is produced – is a large 11 acre site capable of brewing and packaging 500,000 hl of stout, ale or lager per annum. So if the drink is successful I’d expect they’d be capable of producing large volumes.

I will shortly be reviewing London Velvet and am certainly interested to see if the actual product has a great and satisfying taste. I will let you know how I get on – in the meantime you can find out more on their website http://www.london-velvet.com