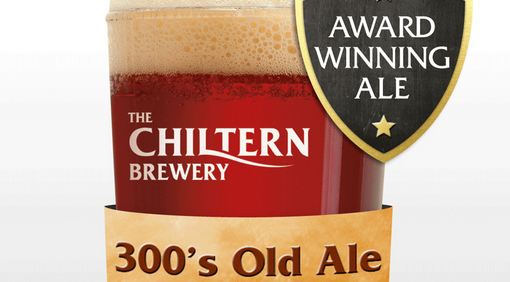 A local beer with a name inspired by geographical county boundaries dating back to the Domesday Survey has been declared winner of the CAMRA Aylesbury Beer Festival for the second year in a row.

Three Hundreds Old Ale from The Chiltern Brewery in Terrick near Wendover is considered a classic in the tradition of old ales displaying a wonderfully enticing robust, full, deep flavour with a long finish. It is available seasonally between October and January in draught 4.9% vol and permanently in bottled varieties 5% vol.

Brewery director George Jenkinson was extremely excited to accept the award for the second time. “It is particularly significant for us because not only is this our local CAMRA beer festival, but the winner is voted for by the actual festival goers themselves. It is a great endorsement from beer drinkers and lovers” he said, when presented with the award at The Farmers’ Bar in the King’s Head Market Square Aylesbury. The beautiful and historic pub is, in fact, the brewery tap for The Chiltern Brewery.

Head brewer Tom Jenkinson also believes the award is testament to the Brewery’s faith in serving the beer from traditional wooden casks. “It’s an age-old, proven method which we’re delighted to have reinstated and which we believe helps develop a fuller flavour and body for the beer” he said.

Historically, Aylesbury became the name of the hundred formed from the three combined 11th century hundreds of Aylesbury, Risborough and Stone. The beer festival organized by CAMRA, the campaign for real ale, is held over the last weekend in October each year.