One of Yorkshire’s fastest growing microbreweries, Ilkley Brewery, has got massive recognition in London since winning the first Craft Beer Battle held at Merchant Yard at the beginning of June.

The brewery has built some real momentum in the Capital over the last few months with listings at the Rake at Borough Market, Jamie Oliver’s barbecue steakhouse Barbecoa, CASK in Pimlico and Craft in Brixton, to name a but a few.

Winning the Craft Beer Battle with it’s Mary Jane Transatlantic IPA was a real feat seeing off serious competition from the likes of BrewDog, Meantime, Fuller’s, Camden Town Brewery, Curious Brew, Black Isle Brewery, WEST and a mystery brewery that was also included in the line-up – later revealed to be Brooklyn Brewery from New York! 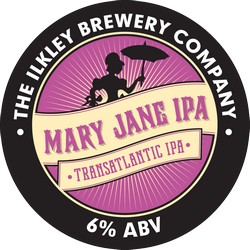 The event was organised by Tweat Up, famed for hosting food and drink events such as Ginstock, Fifteen Street and Ribstock, and attended by more than 2,000 craft beer fans who took part in the blind tasting. Due to this success the event is set to become an annual event – perfect for Britain’s burgeoning craft beer brewers and fans.

“Winning against such a stellar line-up of craft breweries was a huge moment for us. Competitions like these really help to cement the hype surrounding the craft beer boom because it all boils down to taste.”
Luke Raven, Ilkley Brewery

“Simply having the opportunity to feature in the Craft Beer Battle, alongside such craft beer greats, was a fantastic platform for us to introduce our beers to a discerning London market. Winning the competition was something else!

“We are delighted with this level of recognition and our recent listing at Barbecoa has only strengthened our profile in the capital. I hope it continues to open up growth opportunities for us in London and beyond.”

On July 1st, the team from Ilkley Brewery will return to the capital at a meet the brewer evening which will be held at Craft in Islington from 6pm onwards.

Here, they will be trialing an experimental saison called Siberian Nights, a 5% dark version of Siberia which was originally  brewed in collaboration with  beer writer Melissa Cole.

There will be an additional ten real ales from Ilkley available on Craft’s handpumps plus two keg products. Entry is free and open to all.