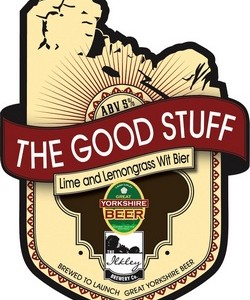 Leigh Linley, one of our best British beer bloggers, has teamed up with Ilkley Brewery to create a bespoke summer ale to help celebrate the launch of his first eagerly anticipated book “Great Yorkshire Beer”

The ale is named after Leigh’s popular blog – “the Good Stuff”. It’s a 5% ABV witbier made with lime and lemongrass.

It will be the official book launch beer and will sit alongside 12 other Yorkshire brewery beers, each of which is featured in the book.

The book launch takes place tomorrow at 7pm – 30th May – at The York Tap, located next to York railway station. The book launch is free to attend and open to all.

Leigh, who is a member of the British Guild of Beer Writers, has been writing about beer since 2007 through his blog. In his first book, he visits Yorkshire’s newest and most critically acclaimed breweries to tell their story and showcase their most successful beers; beers which are breaking rules and which celebrate the Yorkshire pint through worldwide influences, diverse ideas and modern brewing.

“Chris from Ilkley Brewery first suggested brewing a book launch beer when we met back in February at the launch of Ilkley’s chocolate Chipotle stout, The Mayan. Knowing how Ilkley likes to do things differently, I was keen to get on board to make this Witbier, a style of beer I’m a firm fan of.”

“The Good Stuff will be available exclusively at my book launch and will be one of 13 beers on tap from each and every great Yorkshire brewery that I’ve featured in the book. The evening will be a celebration of Yorkshire’s brewing heritage and, more recently, its place in the eye of the craft and microbrewing storm.”

“Leigh’s work is highly regarded in the beer trade so we were very pleased to collaborate with him to create The Good Stuff for his first book launch.”

“Leigh’s beer knowledge is vast and so it’s great he’s honed his expertise to showcase Yorkshire’s finest breweries, many of which have been blazing a trail throughout the craft beer boom. We’re very much looking forward to sharing Leigh’s brew at the book launch and wish him every success for the future.”

Copies of Leigh’s book will be available to buy from Ilkley Brewery on Ashlands Road, Ilkley – www.ilkleybrewery.co.uk/