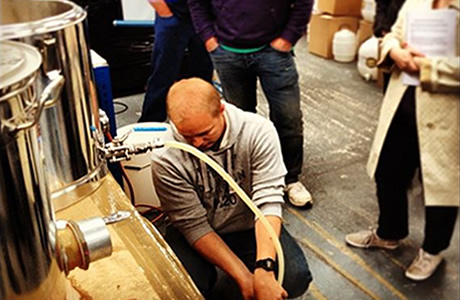 I started my home-brewing journey about 6 years ago after sampling some friend’s efforts from a kit and thinking that’s actually good beer and better than a lot of bought stuff. I was surprised as many years before my Granddad used to get these kits from Boots and the resultant brew was dubious to say the least!

For the first 4 years I used beer kits myself – where the wort is provided in a syrup and all you need to do is add water and yeast in the fermenter, keep the temperature around 18-21 degrees, wait a few days, bottle with spray malt or carbonation tabs, wait a couple of weeks and BANG WALLOP – you’ve got yourself a 30-40p pint of reasonable and decent beer – without visiting the Czech Republic!

My children were young at the time – so I really didn’t have much free time on my hands – so brew kits were ideal and I would still recommend them today.

Obviously, some kits were better (and pricier) than others – the cheaper ones tend to give you just one tin of wort and the balance is made up with “brew enhancer” sugar powder – and the results from these can be less satisfactory. I particularly like quality kits from Muntons and St. Peters – where you get two tins of wort and no extra sugary power is needed. These often give brilliant results if you follow the instructions and clean your kit well. 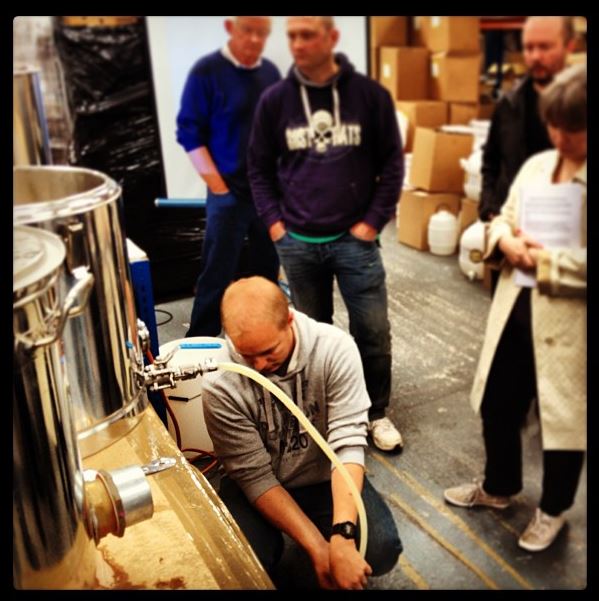 However, I personally always felt like a bit of a cheat doing this and also that I was missing out on some of the creative aspects of brewing. Fermentation and bottling is only part of the process after all – and often best done by lab technicians – as it’s mainly about temperature control and having sterile well cleansed kit. OK, you can get a little bit of creativity going with some dry hopping – or re-heating the wort and adding hops – but somehow it feels disappointing and unsatisfying that it’s not your own wort that you are working with.

So if I was to be truly satisfied, I would need to rewind and create my own wort from scratch. I went about this by following the instructions from the book “How To brew” by John J.Palmer (Link to Amazon) – and then hurrying off to the excellent Home Brew shop in Aldershot (not far from where I live) and buying some more kit and ingredients – Maris Otter Pale Malt and various hop varieties – and then following various recipes of my favourite beers and generally having a crack at it.

The process definitely needed much more time and preparation which I don’t often have – a good day was needed from start to fermenter. So I had to find the odd weekend where I wasn’t shuttling the kids around to their various sporting events – which isn’t easy when you have 2 young sporty and talented kids (they say things miss a generation)!

Initial results tended to be pretty good and I have to say better than the kits. I also love the creativity that it offers – changing the recipe – trying different grain combinations, hop varieties – for both bitterness and aroma, boil times and so on. You want to invest more time in it – because you’ve created it from scratch – it is your beer!

On visits to The Home Brew shop where I buy my ingredients – I’d been advised that they did a mashing course – and I had heard great things about this and often thought about going along myself. I finally decided to do so a couple of weekends ago as I thought it would be good to see how others do it and manage the various processes and stages of brewing.

The course is run normally once a month on a Saturday and is very reasonably priced at £30 – you can book online via their website (link provided: http://www.the-home-brew-shop.co.uk/acatalog/Mashing_Course.html) 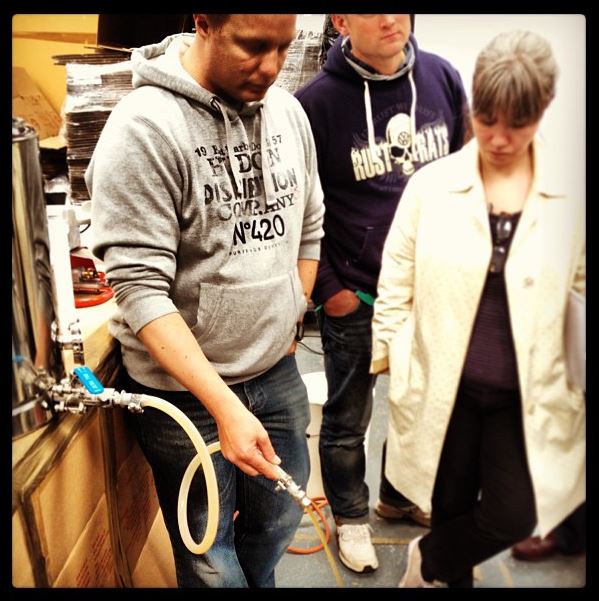 You arrive for a 10am start – however the 2 instructors have been there since 8am – prepping for the brew day. They’ve pre-mixed their grain, cleaned all the kit, conditioned the water – and got it ready to go in the hot Liquor tank. But don’t worry they talk you through all of this with the time they have during the actual mashing and boiling.

When you turn up there is a great selection of drinks and you get the chance to mingle with your fellow students – roughly about 20 people were on the course – some who had been brewing like myself and others who were complete novices. The course was fully booked and surprisingly people had come from quite far afield – Salisbury and London – which is always a good sign.

There were two instructors for the day – Adrian Green the owner and Martin. The latter using a stainless steel kit and batch sparging – and Adrian using a three cooler box system on 3 different levels and fly sparging.

Martin, was the main instructor for the day and was excellent – very knowledgeable and an obvious home-brew expert and enthusiast – with some impressive kit! He kept us well informed throughout the day and was very engaging and approachable.

They got things started quite sharply – but it was hands on throughout – with us all getting involved – adding the water from the hot liquor tank with the grain – and mixing in the mash tun, and so on.

Whilst the mashing process was underway – there was a great talk and demonstration on how to condition the water – which is very useful as most of us live in hard water areas – especially round here. We also talked about equipment, grains, hops (both for bittering and aroma), sparging, IBU’s and so on. Everything you needed to know was covered at some point during the day.

Once the mashing was complete – there was a hands on demo of sparging and getting the wort into the boiler and subsequently getting the boiling process up and running – with an extreme gas burner that was more like a jet engine and as loud!

Once the hot break had occurred and the 90 minute boil process was fully underway it was an opportunity to have lunch – which was laid out for us nearby – a great variety of sandwiches, drinks and other buffet fayre.

Lunch was also an opportunity to chat to the instructors and fellow attendees, and to sample beer made on the previous course by Adrian and some beers that a couple of chaps had brought along as well.

After lunch there was a decent demo and overview of some excellent software called BeerSmith – which I will definitely start using as it will really help me with achieving repeat-ability and consistency – amongst other useful functions and features.

After looking at the software – it was time for the final part of the process – getting the wort cooled – demo’ing 2 different techniques and types of equipment that can be used for getting it into the fermenter at the right temperature – around 21 degrees.

Once in the fermenter Martin took a gravity reading before adding the yeast. Martin was a little disappointed as he was expecting a beer that was going to end up around the 4.9% ABV mark – but it was looking more like a 4% ABV beer – we all tried to put a positive spin on this – it would be a great session beer after all! He had used 4 varieties of hops – including Citra, Simcoe and Goldings at various times across the process – aiming for an IBU around 30 – so it was going to be a lovely hoppy aromatic and citrusy beer!

There was a final discussion around the best yeasts to use – as the yeast was added – followed by a end of day Q&A.

The course came to an end around 3:30pm and to Martin’s astonishment everyone applauded – which apparently was a first! I think everyone (novice and semi-pro alike) enjoyed the day and the course and the applause was therefore well deserved and justified. I certainly took away some useful tips and information that will help me improve the beer that I create.

Overall the course was excellent value for money and I would totally recommend it to anyone who wants to see how easy the whole brewing process can be. It really helps to dispel the myth that it isn’t rocket science – like some books and people will try and make out.

To get brewing and making your first craft beer can be a lot easier than you think and is also extremely rewarding – and this course would give anyone the confidence to have a crack!