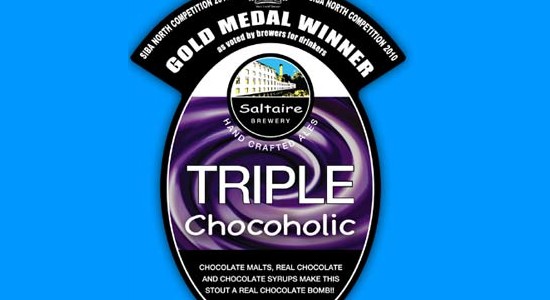 Saltaire Brewery’s multi award winning Triple Chocoholic Stout is to be used in a new pint-sized Christmas pudding from Yorkshire bakery Thomas the Baker – the perfect treat for the festive season!

Thomas’s special edition Triple Chocolate Stout Christmas Pudding has been given a “modern twist” with a generous glug of the Saltaire’s Triple Chocoholic stout, which combines chocolate malts with cocoa and chocolate essence, as well as high-cocoa content chocolate nibs.

Michelin-starred Yorkshire chef Jeff Baker is responsible for giving Thomas’s classic Christmas pudding recipe which has been used by the Bakery for the last 70 years a makeover, with the addition of a generous helping of Saltaire Brewery’s ‘Triple Chocoholic Stout’ and Belgian chocolate chips.

Jeff says he and the Thomas the Baker team did five or six trials before they achieved pudding perfection.

“The pudding was already an award winner – using top quality flour, vine fruits, Guinness and dark rum – so it was a tough one to improve, and I didn’t want to compromise its luscious character,” says Jeff, who has run some of Yorkshire’s most critically acclaimed restaurants, retaining his Michelin star for 10 consecutive years. “So we swapped the Guinness for Saltaire’s Triple Chocoholic Stout and soaked the fruit in this for a week to get just the right ‘savoury’ flavour. The finished pudding has an unctuous fruity tang and a wonderful aroma.”
Michelin-starred Yorkshire chef Jeff Baker