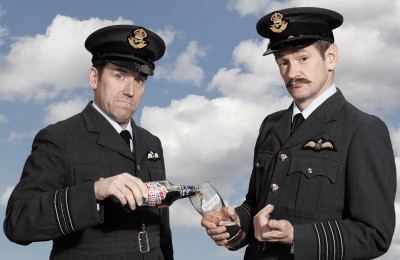 The collaboration will involve Armstrong and Miller acting as the Spitfire Ale Ambassadors for two years, making public appearances on behalf of the brand at trade and consumer events. They will also become the key focus for a new TV and print advertising campaign, launching in the summer. The RAF pilots are popular characters from their award-winning comedy series. They are renowned for using stereotypical modern-day street vernacular but speaking with clipped 1940’s accents.

“We are very excited to have Alexander and Ben’s RAF pilots as our ambassadors. Spitfire has always been associated with a very British sense of humour, and the characters are an excellent fit for the brand’s personality. With this collaboration, we will offer engaging initiatives for licensees and stockists, to appeal to consumers with yet more distinctive Spitfire humour.”
Kate Maclean, Spitfire brand manager

Originally brewed to celebrate the 50th Anniversary of the Battle of Britain, Spitfire Ale is renowned for its cheeky humour across its marketing and advertising. Past campaigns have featured print campaigns with taglines such as ‘Downed all over Kent, just like the Luftwaffe’ and ‘No Nazi aftertaste’. The brand’s trade activity has included giving away ‘free beer for a year’ and ‘one year rent-free’ through its Operation Landlord campaign.

Well known for their BAFTA-winning sketch comedy series The Armstrong and Miller Show, which ran for three series from 2007, the pair have worked closely together for over 20 years since meeting at Cambridge University. A familiar face on stage and screen, Ben Miller has recently starred in the second series of the popular BBC detective drama Death In Paradise and a West End run of The Ladykillers at the Gielgud Theatre, London. Alexander Armstrong has starred in numerous television dramas including Love Life, Mutual Friends and Hunderby, and has hosted popular quiz show Pointless since 2009 alongside other presenting roles including Alexander Armstrong’s Big Ask and as a guest host for Have I Got News For You.