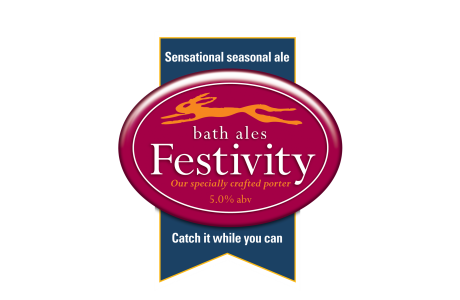 Bath Ales’ winter brew, Festivity, is making a return for its sixth year following popular demand from consumers and retailers across the South West.

The special seasonal ale has grown from being a small limited edition run to winning big listings in major retailers including Tesco and Waitrose.

Festivity goes on-sale from early November and will be available on draught in pubs and bars across the South West, including Wetherspoon’s as well as in Tesco and Waitrose stores regionally.

“Festivity is a wonderful old style porter – a perfect winter warmer which always proves popular with drinkers. In previous years sales of this beer have greatly exceeded our expectations and it’s always a sell-out brew.”
Gerry Condell, head brewer of Bath Ales

The specially crafted porter is a truly seasonal beer brewed using floor-malted Maris Otter barley and roasted chocolate malt, together with Challenger and Bramling Cross hops from Kent. Dark ruby in colour, Festivity’s hint of rum mingled with coffee and vanilla flavours has earned it a loyal following.

The beer is also a fantastic match with food, especially Christmas treats such as chocolate, berry or coffee desserts.

“We are delighted to have secured additional listings with Tesco and continued our reach with Waitrose for what’s increasingly becoming one of our most popular beers.

We hope Festivity adds seasonal flavour to our customers’ Christmas celebrations this year.”