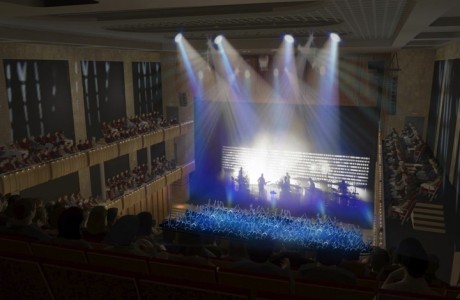 Bath Ales and Colston Hall have today announced they will be joining forces to create a locally inspired Café Bar and restaurant destination within the South West’s leading concert hall, offering something for locals, foodies and concert goers alike.

Independent brewer Bath Ales is known for its distinctive craft beer range including Gem, Dark Side and Wild Hare. It also has a growing range of South West drinking establishments, including Bristol’s craft beer bar, Beerd, The Hare on the Hill, The Wellington and Graze Bar, Brasserie and Chophouse in Queen Square.

Having successfully won a competitive pitch, Bath Ales will take over Colston Hall’s popular Café Bar in the new foyer area on 14 November and will reopen the 40-seater restaurant on the upper ground floor in the New Year.

Both venues will undergo a refurbishment at the beginning of 2014 to bring the distinctive Bath Ales touch to the spaces, focussed on quality and individuality through its food offering and décor.

The locations comprise of the Café Bar on the lower ground floor and the Bistro which is located on the upper ground floor. Millions of Bristolians and visitors have enjoyed the venue since it opened in 1867.

Robin Couling, managing director of Bath Ales, said: “Colston Hall is a landmark institution in the heart of Bristol, so we’re thrilled to be working with the venue and its operator Bristol Music Trust to create a dining and drinking experience in line with the developing entertainment offering in the halls.

“We select our venues extremely carefully, always looking to challenge ourselves and offer something of high quality with a point of difference. This is exactly what we plan to do at Colston Hall.

Robin added: “Our business is going from strength to strength and, alongside strong sales of our beer, this is being driven by innovation in our retail division. As we look to continue our expansion plans, 2014 is already shaping up to be a very busy year.”

Marguerite Jenkin, Finance and Commercial Director of Bristol Music Trust which runs Colston Hall explains: “Bath Ales is an ambitious local business that enjoys a great reputation for their venues and their beers. The Café Bar is always buzzing with activity, so we’re hoping that even more people will use it as a space, popping in to enjoy a free concert in the foyer, while the restaurant will offer pre-concert packages and an excellent food offering in its own right. The partnership will ensure we deliver an exceptional audience experience, on a par with the entertainment offering at the city’s leading concert venue.”

The existing team will remain in place in the Café Bar and will be augmented by some of the core Bath Ales team.

In 2009 Colston Hall completed the build of its new foyer, meeting spaces, restaurant and Café Bar. Bristol Music Trust’s plans are well underway to raise funds to undertake the second phase of this refurbishment with the complete transformation of the performance spaces to deliver a world class venue in the South West.