What is a Craft Beer? My thoughts

I’ve seen countless blog posts and definitions about the true meaning of craft beer over the last few months – a term that is frequently banded about by many including myself.

It seems to be something that everyone wants to debate and some people have really strong and valid opinions on this subject – perhaps due to the term having recently found its way over here from the other side of the pond.

The problem is in the US there is a clear definition, whereas over here in the UK there isn’t – so whereas most of us seem to interpret it in a similar way – others may not – and hence there will always be a clash and general confusion.

The US definition can be found on the Brewers Association web site (located here) – and is as follows:

An American craft brewer is small, independent and traditional.

Small: Annual production of 6 million barrels of beer or less. Beer production is attributed to a brewer according to the rules of alternating proprietorships. Flavored malt beverages are not considered beer for purposes of this definition.
Independent: Less than 25% of the craft brewery is owned or controlled (or equivalent economic interest) by an alcoholic beverage industry member who is not themselves a craft brewer.
Traditional: A brewer who has either an all malt flagship (the beer which represents the greatest volume among that brewers brands) or has at least 50% of its volume in either all malt beers or in beers which use adjuncts to enhance rather than lighten flavor.

The following are some concepts related to craft beer and craft brewers:

For me it’s really quite simple – for a beer to be considered a “craft beer” it has to have been created with the following:

In America a large brewery can’t create a “craft” beer and this seems wrong to me. A large brewery can definitely produce a real quality beer, and equally a nano and micro brewery can produce horrendous undrinkable muck. Beers created by Pilsner Urquell, Leffe and Duvel – are created in vast complexes – but the beers are great and very consistent (which for me is a plus). Equally breweries like Brew Dog, Meantime and Sharp’s are starting to move into the big boys territory – well bigger than micro – now does that mean their beers eventually stop being well crafted “craft” beers? 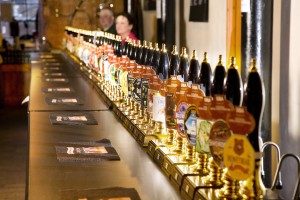 If the word “craft” is too vague and not well defined is that wrong? Does it really cause a major headache for all involved?

If so, perhaps we should be looking at a different term to help describe a beer that has above average qualities and characteristics – but really, what are the alternatives? Artisan, Innovative, Micro-brewed  New Wave, Super-Hoppy, Experimental, American-Influenced – these all seem to represent too small a subset which eventually feed back into the Craft bucket.

So I personally just keep coming back to Craft – because ultimately a master brewer who knows his craft will produce a good beer using the tools available to him – whether that be a home-brew setup, a micro brewery or huge factory brewery – and whether it’s delivered in a Cask, Keg, Bottle or now more frequently a Can.

And there appear to be many top beer writers and brewers that share similar views to me. Alex Troncoso, now the head brewer at Camden Town Brewery recently made the following statement on the subject:

“For me, craft beer is a philosophy,” he says. “If you go back to the industrial revolution … before then, if you were going to build something, you would make all the parts yourself. I think that’s one thing a craft brewer has to be: conversant with how brewing is done, all the way from mashing through to bottling beers.

“It’s also about quality – by which I don’t mean crazy flavours, but something really balanced and well made. A brewery where everything is precise and organised. Whatever happens in the warehouse, the beer is going to taste great – not a great batch here, a bad batch there.”

Again Peter Brown one of our best beer writers recently stated the following in a blog post:

“My personal view, as I expressed in response to Mark Dredge’s excellent recent post about craft beer whiners, is that it’s more useful to think of craft as an adjective rather than a noun. Not as a specific style of beer, but as a general description, the same way we’d say ‘dark’ or ‘full bodied’ or whatever – deliberately non-specific, but carrying a degree of commonly understood meaning.”
Peter Brown, UK Award Winning Beer Writer

And Mark Dredge – the author of Craft Beer World (a book which I love browsing – that has facts on 350 craft beers – some from large breweries), states the following in a recent blog on his site:

“Craft beer is just a name; I don’t think it’s an actual definable thing and certainly not in any meaningful way. It’s like a farmer’s market. How do you define that when every one you go to is different? You don’t define it but you know what you get when you visit one; some are better than others, some are more commercial, some are more rustic. I simply don’t think we need to define craft but I do think we need to kill the misunderstanding between craft and cask because we need to appreciate that they belong side by side and that one isn’t trying to replace or undermine the other.”
Mark Dredge, Author of Craft Beer World

However, before I sign off on this subject – with my thinking that everyone should chill out and just accept the generic qualities of the term “Craft” – there are those (whose opinions I value) who still seem to think the US definition should be applied and considered.

For example, Garrett Oliver, head brewer at the Brooklyn Brewery in New York and editor of The Oxford Companion to Beer claims:

“It’s a term for beer made by traditional means and brewed to create interesting, complex flavours,” he says.

“It does imply that you are talking about a relatively small and independent brewery. That stipulation has been part and parcel of the whole movement … up until now, the only people who were really interested in making these beers were us (smaller, independent breweries).”

Oliver strongly believes there is a human aspect to craft beer that the bigger, multinational brewers can never emulate.

“Real beer is made by people, not by machines,” he says. “Nobody knows the names of any of the brewers at the big breweries. Even their top distributors don’t know their names. The brands, the beers are divorced from people.

“The difference with craft beer is that when you’re talking about a brewery, you know whose beer that is. It’s a very personal thing.”

Garrett Oliver, Editor of The Oxford Companion To Beer

And with those words – we are back at the beginning again, with no clear outcome on the definition of Craft beer!

So I do really feel a UK definition is needed – and if I was to come up with a strong and less vague definition I think I would use and always refer to Dan Shelton’s 5 point definition of what a craft beer is:

This debate will go on for a long while yet – but in my mind I know what a craft beer is – and I will continue using the term until something better comes along.

Out of interest can anyone actually remember what we called Craft Beer over here in the UK before the term came over from the states? Now that I would be interested in…