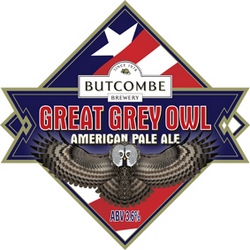 The beer was recently launched at the brewery’s city centre pub in Bristol, Colston Yard. GGO is a full-flavoured, complex American pale ale which packs a huge punch for a relatively low gravity beer at 3.6% ABV, says the brewer.

It uses hops from the Sierra Nevada in western USA, where the great grey owl is a rare breed. The beer is golden in colour and made from a medley of five American hops, including Citra. A subtle biscuit malt background balances the strong hop character. Hugely fruity on the nose, tropical fruit flavours take over on the palate leading to a citrus bitterness in the finish, say the tasting notes.

Great Grey Owl is now available in selected pubs in Bristol, Bath, Weston and Mendip’s from June through to August, as well as in dozens of other free-trade pubs and eight of the Mitchells & Butlers brands. These include their Ember Inns, Vintage Inns and Nicholson’s pubs throughout London. The new ale will also be available to Wetherspoon pubs from July through to August, including Bristol’s W G Grace.