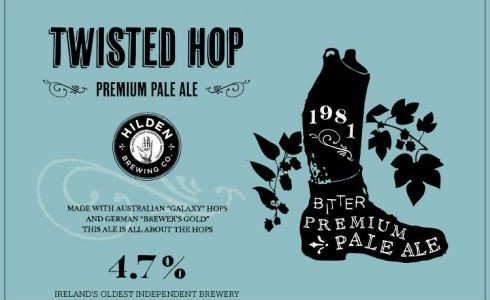 Dublin Craft Beer Cup – and the winner is…

Hilden Brewing Company, Ireland’s oldest independent brewery, beat out more than 100 breweries from around the world to win the 2013 Dublin Craft Beer Cup for its Twisted Hop pale ale.

The cup was awarded during the International Brewing and Distilling Convention, hosted by Alltech in Dublin, last week.  The competition also awarded 69 medals to breweries worldwide.

This unique event, the first of its kind, allowed craft brewers to showcase their beers and have them rated by world renowned beer judges. Winners were chosen by an expert panel of 12 judges based on appearance, aroma, flavor, body, style and quality. The 2013 competition saw entries from more than 100 breweries in North America, South America, Europe, Africa, Asia and Oceania.

At the same time, the International Craft Brewing and Distilling Convention was being staged, enlightened minds and taste buds with an impressive craft brewing and distilling educational programme.

The convention kicked off with the fusion of Kentucky bluegrass and Irish traditional music for the WoodSongs Old-Time Radio Hour, a concert attended by almost 2,000 people, who enjoyed artists such as Mary Black, Paul Brady and We Banjo 3. It was the first internationally held event for the radio show, which regularly broadcasts on US public television, as well as more than 500 radio stations globally.

On Friday, more than 800 people passed through the doors of the Expo — a forum covering all aspects of brewing and distilling from equipment and yeast selection, to pairing the final product. Attendees entered through an oversized wooden barrel where they watched an LED sphere playing the history of craft brewing and savored the smells of hops and malts.

They sampled international craft beers and chatted with the brewers at the Craft Beer Market that showcased beers from European breweries including O’Hara’s, Früh, Hardknott, Jever, Great Heck, Metalman, Thornbridge and Beavertown. Plenty of food was on hand for pairing with the craft brews, including cheeses, breads, fish and Lyons Farm beef.

In the center of the Expo was the Pavilion Bar, dispensing Alltech’s Lexington Brewing and Distilling Company’s beers and spirits to thirsty guests. Brews included the newly released Kentucky IPA, Kentucky Bourbon Barrel Stout and the flagship Kentucky Bourbon Barrel Ale. A sensory lounge allowed experienced brewers, home brewers and beer and spirit enthusiasts to taste whiskey, bourbon and beers to learn more about proper tasting and the impact of different ingredients on flavor profiles.

Mark Lyons, vice-president of corporate affairs at Alltech, also gave an eye-opening presentation on the potential markets in China. “Twenty years ago beer in China was a foreign experience,” he explained. “Now, China has grown to become the largest beer market in the world, with the Chinese consuming one in four beers produced globally.” This is why, he said, “the future is here and it’s called China”.

On the final day, Alltech announced the recipients of the awards for: outstanding service in brewing and distilling, which went to Graham Stewart; and lifetime achievement in craft distilling, awarded to Bill Owens. Both men have spent many years honing their craft in the industry while inspiring younger brewers to do the same.