Warning: Use of undefined constant WOOCOMMERCE_VERSION - assumed 'WOOCOMMERCE_VERSION' (this will throw an Error in a future version of PHP) in /homepages/45/d105105863/htdocs/live_craftbeersorguk/wp-content/themes/inovado/functions.php on line 405
 Bru Haroo! – Pale Ale
Call me: (+44) 7880 737515

Brewed By The Kernel

I bought a bottle of this at Utobeer located in Borough Market and was very much looking forward to getting home and cracking it open. I’d heard some really good things about the Kernel Brewery in London – so expectations were very high.

They’ve brewed quite a few Pale Ale’s with varying types of Hops being used for each batch – this particular Pale Ale was brewed using Citra, Simcoe and Ahtanum Hops with a 4.9% ABV.

I wanted to get straight in there – but because of quite a bit of sediment it was recommended to leave it for a few hours upright in the fridge – which I did for a little while.

Finally I got to pour it – in the glass its appearance was hazy pale amber and still slightly cloudy from the sediment – with a white bubbly head.

The nose was pithy and citrusy with some grapefuit notes. And the taste – lovely grapefruit and pine – with perhaps a bit too much chalkiness – it also had a mineral and hoppy bitter finish. It was very drinkable and enjoyable – but didn’t make me get to my knees and pay homage to the beer gods – there wasn’t enough fruitiness for me and it felt less full bodied than some of its contemporaries

It was perhaps my expectations that it was up against – and it was also up against stiff competition and cleaner more balanced pale ales – I’m therefore awarding it with 3 stars – and look forward to trying more beers from this brewery – they obviously have some talent! 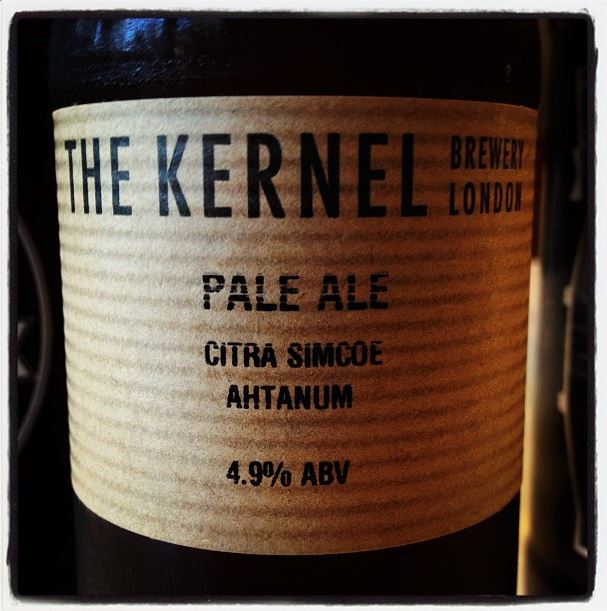 Because the Kernel keep producing new beers – they do not have information on beers like this – than may no longer be in production – here is some info from their site on the actual brewery:

The brewery springs from the need to have more good beer. Beer deserving of a certain attention. Beer that forces you to confront and consider what you are drinking. Upfront hops, lingering bitternesses, warming alcohols, bodies of malt. Lengths and depths of flavour. We make Pale Ales, India Pale Ales and old school London Porters and Stouts towards these ends. Bottled alive, to give them time to grow.