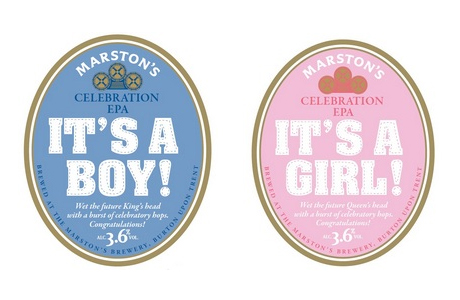 Thousands of British pubs are getting ready to celebrate the birth of the Royal baby this weekend – and if they are serving Marston’s special edition EPA – they are already one step ahead of the rest..

Marston’s EPA beer is ready for the day and has a specially designed badge for the handpull on the bar. One side says “It’s a girl” and the other “It’s a boy” – ensuring they are covered be it a prince or princess!

“While many brewers will make a beer to celebrate the Royal birth after the event, we thought that pubs needed a way to celebrate instantly with customers after the news has been announced. This way we hope that the nation can wet the baby’s head along with the family.”
Ian Ward, Marston’s Spokesman.

Brewed to be an easy drinking but flavoursome beer, EPA uses modern brewing methods and a combination of the modern and classic Cascade and Stryian hops. At 3.6% ABV, EPA is a refreshing, lighter blonde ale with subtle citrus flavours and a delicate bitter aftertaste. It will appeal to drinkers both of traditional bitters, ales and even lagers because it delivers refreshment with flavour, says Marston’s.