Meantime takes the road with tanked and unpasteurised craft beer

Dispensed directly from two specially engineered five-hectolitre tanks, the beer remains entirely unpasteurised, unfiltered and unoxidised until the moment it hits the glass, the result of which is the smoothest and most flavoursome beer possible – like drinking it straight from the brewery

The Beer Tank will be on the road every weekend this summer, in residence at many of London’s most exciting events and at the mercy of London’s ‘twitterati’ – tweeting for the chance to appear at their very own event. 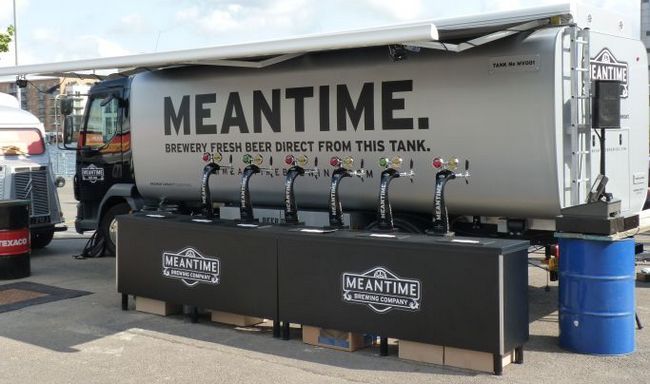 Alongside Brewery Fresh, The Beer Tank will also be showcasing a range of Meantime’s regularly changing limited edition and favourite core brews, dispensing more than 5,000 pints of craft beer across the capital at any given time.

“The launch of The Beer Tank marks an exciting next stage in the growth of the company, breathing new life into London’s craft beer revolution — quite literally taking the brewery to drinkers in their own backyard.

“Earlier this year we launched tank beer in three Young’s pubs across the capital, becoming the first brewer to bring the concept to the UK on a permanent basis. With others following in our wake, we see The Beer Tank as the logical next step, incorporating yet more innovation into the world of beer.”

Beer Tank can be found at the following events

For more details on how to be in with a chance to win the ultimate summer party centrepiece, with an exclusive appearance The Beer Tank at your next event, go to the Meantime Facebook page or check out @MeantimeBrewing on Twitter for full details.