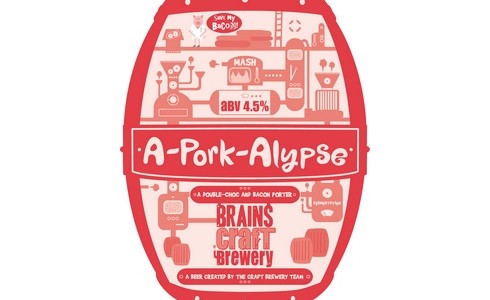 Brains, the Welsh brewer will return to the Campaign for Real Ale Festival Great British Beer Festival this year with its new craft beer A-Pork-Alypse.

The new beer was brewed by Brains’ head brewer, Bill Dobson, after a trip to the Great American Beer Festival (GABF) in Denver.

“The range of beer styles, flavours and ingredients used in the beers at the GABF was incredible and the one that really stood out used bacon in the brew.

“I came back from The States wanting to brew my own, and after a few trial and errors with the quantity of bacon I brewed A-PorkPost-Alypse, a double-chocolate and bacon porter. A grist of roast and smoked malts with freshly grilled bacon added to the boil along with cacao nibs gives the beer a smoky flavour alongside the chocolate.”

A-Pork-Alypse will be available on the bar along with three other beers from the Brains Craft Brewery:

Another experimental brew will also be available on an extremely limited basis of one firkin a day. Low-Hanging Fruit – an easy-drinking dark mild with a wild twist of being soured with Morello cherries.