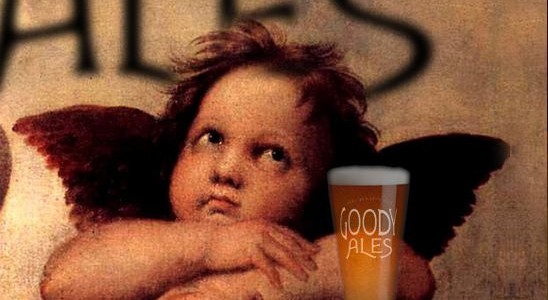 Local beer producer Goody Ales has been awarded first prize at the Kent Hop Show on Wednesday 20th November 2013 for their Genesis bitter. With the low strength ABV 3.5% but most flavorsome bitter, Genesis was described by Ramsgate brewer, Eddie Gadd as “bloody gorgeous beer!”

The Kent Hop Show is an annual event and this year Kent hop growers entered 108 samples of hops of all varieties in six classes. Hop experts assessed the aromas and oil contents of the hops to select the winning hops.

However, the most anticipated result of the evening was The Best Hopped Ale Competition. There were entries from various different Kent Breweries, offering a wide range of beers. The three Judges took a long time deliberating over the sample ales and discussing which should win and why.

First prize went to Goody Ales and their Genesis beer which is hopped with Humphrey Hulme’s Challenger Hops. It is an easy drinking ale with bags of flavour. Second prize went to The Swan on the Green with their Fresh Admiral brewed by Paul with Stuart Highwood’s Admiral from Crow Plain at Collier St.

Third prize went to well loved favorite in the Weald by Larkings Ales at Chiddingstone and their Traditional brewed with Hops they had grown themselves at the Home Farm.

Genesis can be tasted at various pubs in Kent and can be sampled and purchased fresh from the cask at the brewery. Brewster Karen Goody is delighted about the award as it is the first beer brewed at Bleangate Brewery. Originally it was going to be a one-off, trial beer but has proven to be so popular that it is now a very popular, regular beer.

Peter McCabe, Director of Goody Ales said, “Genesis is a single hopped beer and has a very full flavour for it’s low ABV. It is a session beer which can be enjoyed any time.”

Karen is passionate about using Kent hops and most of their beers are brewed using local hops.

“Why go further afield to find other hops when Kent has a long history of growing the finest hops in the world. We brew traditional English ale and we have the best hops on our doorstep. There is no point in transporting our ingredients from around the world when we have our own first class produce. I am very proud of being from Kent and will continue using local Kentish hops.”
Karen Goody, Goody Ales Brewster

Peter McCabe added “We will be serving ‘Genesis’, our first brew, ‘Goodness Gracious Me’, our IPA and ‘Good Heavens’ our best bitter from the brewery between 4pm and 7pm on weekdays and 10am until 6pm on Saturdays. We will be bottling Genesis in the near future but in the meantime we have ‘Good Health’, ‘Good Heavens’, ‘Good Sheppard’ and ‘Good Lord’ in bottles and as gift packs.”

Bleangate Brewery is situated on Braggs Lane, Herne. On the Canterbury road half a mile outside the village of Herne, Braggs Lane is on the right after the First and Last pub. The nearest bus stop is a five minute walk from the brewery. The nearest train station is Herne Bay.