Warning: Use of undefined constant WOOCOMMERCE_VERSION - assumed 'WOOCOMMERCE_VERSION' (this will throw an Error in a future version of PHP) in /homepages/45/d105105863/htdocs/live_craftbeersorguk/wp-content/themes/inovado/functions.php on line 405
 Bru Haroo! – Tanked and Unpasteurised Pilsner Urquell
Call me: (+44) 7880 737515
Bru Haroo! Posts
Bru Haroo! / Blogs / Tanked and Unpasteurised Pilsner Urquell

I was invited along to the launch event on Tuesday night at the White Horse in Parsons Green – where we all got the opportunity to sample unpasteurised Pilsner Urquell and meet the master brewer Vaclav.

It was an interesting and tasty event where I got to chat with Eoin Cannon the global marketing director of Pilsner Urquell for an hour or so and also meet Vaclav Berker!

It’s no secret – I’m a fan of this beer and have been drinking the stuff since I first went to Prague 20 years ago – so I’ll apologise in advance to the cynics – this short review of the event is going to be positive!

Eoin and I talked over a couple of pints about how we both believe craft beer isn’t and shouldn’t be about the size of the brewery – that beer brewed on a mass scale like Pilsner Urquell should also be considered in this category if it’s brewed with passion and integrity.

Well this beer still uses the best and purest ingredients and still follows a recipe and process that is over 170 years old – which does end up producing the classsic pilsner. The fact it’s part of the SAB Miller group can work against it – as in the craft beer world there is natural negativity about the top two major brewers – I must admit to this myself about other beers under their stable – however my opinions are mainly based on taste and personal preference – which is always going to be subjective.

As for passion Vaclav was bursting with life, a boyish cheeky grin and a beer belly that makes you feel confident this master brewer loves his beer! He admitted he’s not as involved in day to day operations any more – but was very keen to ensure the beer arrived safely and well conditioned to London in its lovely copper tanks – it’s his baby after all.

Once tanked the process of getting it across a continent has to be logistically perfect due to very tight timescales – the beer has to leave the Czech republic and be in London (by lorry) within 24 hours – after which the contents of the tank have to be consumed within 5 days. Judging by the demand – this part was not going to be a problem. 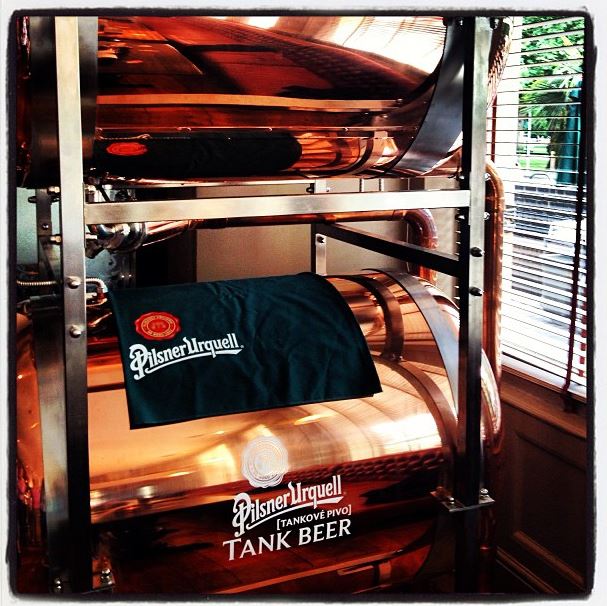 As this was a special occasion, the beer was served in lovely old style heavy tankards – great for the drink – not so great for some of the bar staff – who were having to pour hundreds of pints into these weighty vessels all night.

And the taste? For me the beer tasted fresher, deeper, more biscuity and a little nutty but retained the perfect bitter-sweet balance – I have to admit it was so much better than the normal bottled beer that I frequently drink – but still essentially the classic Pilsner that all others aspire to be.

I asked Eoin if we can expect to see more unpasteurised beer across the capital on a more regular basis. This unfortunately – is a one off event – but he didn’t rule it out in the future. Yes logistically not easy to do – but as proven on this evening very possible! Here’s hoping…