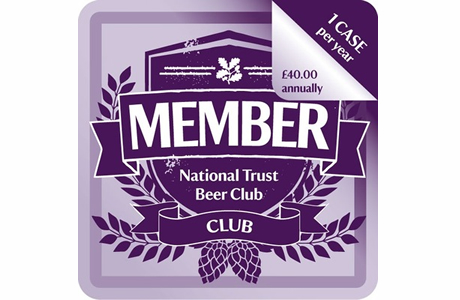 Membership to the club starts from £40 a year and members will benefit from the expertise of the Delavals Brewers who will hand pick a selection of independent craft beers from around the UK.

In the UK the number of breweries now exceeds 1,000 which is a fivefold increase on the number that existed in the early 1970s [1]. Together these breweries make over 4,000 brands of beer and the National Trust Beer Club will aim to make many of these available to its members.

“There has been a real explosion in craft beers in the UK. According to the Good Beer Guide, Britain now has more small breweries per head than any other major industrialised nation, which is great news for beer drinkers.

With the National Trust Beer Club we’ll be able to connect many of the independent craft breweries to beer connoisseurs throughout the UK.

It’s not just for the connoisseur though – Craft beers pack more flavour and are made by entrepreneurs and enthusiasts, so they tap into the growing demand for quality, niche products.

Our National Trust beers are made using hops from one of the last remaining traditional hop gardens in the country – the National Trust’s Little Scotney Farm.”

On joining, each member will receive a case of 12 bottles of beer from the National Trust Great British Beer Collection, an engraved beer club bottle opener plus on-going benefits. Over 100 beers will be available at launch and can be ordered from www.nationaltrustbeerclub.co.uk

“We’re thrilled to be working with Delavals Brewers Ltd. The beer club gives people a new way to experience, discover and enjoy beer.

Plus every single subscription will help raise awareness of the National Trust and generate valuable income for our charitable work, with all memberships and beer sales directly helping the Trust look after special places in its care.

Many National Trust places have a great history of brewing as private country house brewing was prevalent in Britain 200-300 years ago with servants and workers of large estates regularly receiving beer as part of their wages.

The inspiration for Delavals Brewery was the recent purchase of Seaton Delaval Hall in Northumberland by the National Trust. The Hall used to have a working brewery over 200 years ago and Delavals hope to bring this back to life one day.

Shugborough Hall near Stafford is an example of an existing working brewery within the National Trust estate but there are several others with a similar history. The Beer Club will share these sorts of stories over the coming months and years.”