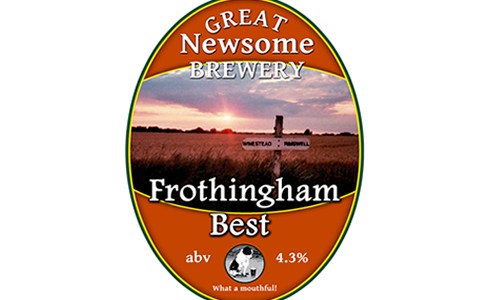 Holderness based Great Newsome Brewery has walked away from the World Beer Awards with Gold for its Frothingham Best.

Frothingham Best, which takes its name from the small hamlet in which the brewery is based beat off strong competition from all over the world to take the title ‘The Worlds Best Bitter up to 5% abv’. The World Beer Awards which were announced on Friday 27th September and are held annually take entries from breweries all over the world including the USA, Canada, Germany, France and Japan and are blind tasted by a panel of carefully selected judges under the guidance of respected beer writer and journalist Roger Protz.

“Wow, I am still pinching myself. It is the first time we have entered any beer into a competition of this magnitude and to think a small brewery in the depths of East Yorkshire can beat off competition from all over the world is unbelievable.

The brewery has been very busy and it is again a great pat on the back for the whole team and something that we can all be very proud of”.

When asked what this could mean for the business, he added, “The brewery has begun this year to export beer with an official importer established in Italy, this recognition can do no harm and hopefully should help give us the edge when speaking to potential customer from elsewhere in the world”.

A dark amber best bitter, Frothingham Best has been brewed since 2008 and is available in both a bottle and as a cask beer. The beer has won awards previously gaining a Silver in its category in the 2009 SIBA (Society of Independent Brewers) North Awards, was Highly Commended in the Yorkshire’s Finest Taste in 2011 and was shortlisted in the inaugural MTT Yorkshire Beer Awards 2013.

Great Newsome Brewery which uses old local dialect and points of interest to name its beers, like Sleck Dust, Pricky Back Otchan and Frothingham Best is based on a working farm near Patrington just outside Hull and celebrated its 6th birthday back in April. It now supplies its award winning cask and bottles beers throughout the UK and has begun to export to Italy.