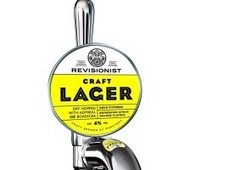 Marston’s has announced the introduction of it’s Revisionist beer series – which has been developed to help showcase Marston’s five regional breweries, from Ringwood in Hampshire to Jennings in Cumbria.

It aims to give it’s brewers a chance to create great new craft beers and lagers using modern and contemporary techniques and ingredients.

The beer is crafted with lager malt, a blend of German Hallertau Magnum, Tradition, and Slovenian Styrian hops, and further dry hopped with British Admiral and Boadicea hops. This delivers a refreshing, easy drinking beer with a subtle citrus orange marmalade flavour. Like all future beers in the Revisionist range, the lager is cold conditioned and micro filtered and distributed in smaller 30-litre kegs for improved freshness.

Other Revisionist beer styles planned later in the year are a wheat beer and a Saison beer.

“Whilst the overall beer market continues to decline, more premium formats of beer, including cask ales, world lagers and craft beers continue to deliver opportunities for growth. [Market analyst] CGA are reporting craft beers growing at 86% year on year. This is being fuelled by many consumers moving away from mass market and commodity beers, looking for products that deliver more of an experience when drinking in the on trade.

“Our annual drinker survey revealed that consumers see craft beers as delivering more taste and flavour than standard beers. They are found in more limited distribution and are produced by smaller, regional and less well-known international brewers, with a passion for process and ingredients.”

“The popularity of craft beer is growing. The development of the Revisionist range and our collaboration with Shipyard is just the beginning of what is set to be a very exciting time for Marston’s in terms of new product development.”