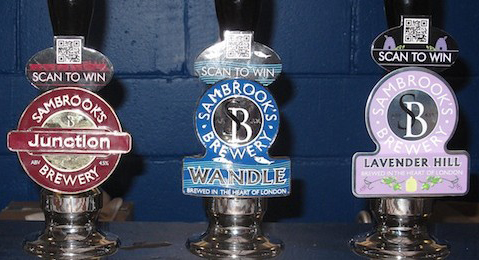 Sambrook’s Brewery help to save the Bees with Honey Beer

Sambrook’s Brewery announced earlier this summer that they would re-release their fantastic honey beer – Lavender Hill. Lavender Hill, which will be the first of three seasonal craft beers to be released in 2013, is a 4.5% pale ale which uses the addition of blossom honey to give it a delicate honeyed taste.

It is also brewed with a new hop variety from the Alsace region in France. A cross between Strisselspalt and Challenger, the hop has a delightful orange blossom aroma to perfectly match the sweetness of the honey. The ale will be available on limited release, with just five batches available.

Lavender Hill, named after the street close to the brewery which used to be home to lavender fields, will be brewed with the same care and craftsmanship as the Sambrook’s core range under the stewardship of Head Brewer Sean Knight.

To celebrate the launch they are holding a competition to find the pub with the best use of honey in a food of their choice that matches with the beer. A shortlist of five dishes will be chosen and a cook off will take place to decide the winner at The Engineer pub in Primrose Hill in August.

Honey is a national treasure that is in short supply – over the past 100 years, 20 species of British bees have become extinct, with a further 35 species considered under threat. It is also estimated that at least one third of the human diet may be at risk if there are any further declines in bee numbers and species. Sambrook’s are using this competition to help raise awareness of the bees’ plight. To enter, pubs should e-mail recipes and images to admin@sambrooksbrewery.co.uk

“We’re delighted that Londoners have embraced our summer seasonal ale Lavender Hill. We’ve organised honey banquets at pubs in London, pairing the beer to sweet and savoury local honey dishes, which have been well received by both beer aficionados and those who are new to beer.”
Jo Miller, Sambroook’s Sales and Marketing Director
Craft BeerHoney BeerLavender HillSambrook's BrewerySean Knight